Google Translate, and Translation Projects in the Classroom

In my post about multilingual students using L1 in the classroom, I briefly mentioned a translation project that students completed in one of my semester-long versions of English 403 (Professional and Technical Writing for ESL Students) at Washington State University. That reminded me that I bookmarked a blog post from Google last month about changes in Google Translate.

At the ASLE conference in early June, one of the audience questions was about on-the-fly translating services. It wasn’t really as tangential as a question as it might seem; the roundtable was about blogging space and place and I was bringing the technical knowledge, as it were. Essentially, the question was how do we talk about space and place and foster community when we’re only speaking English and on-the-fly free translation software isn’t all that good?

My response was that “Google was working on it”—lo and behold a few days later the official Google blog posted information about the new Google Translate crowdsourcing plans, or Google Translate Toolkit, saying that “sometimes machine translation could use a human touch.” Humans are a large part of making Google search and Google ads work well; algorithms go a long way, but humans fine-tune the results and help the machine learn

The Google Translate Toolkit provides a workspace for people to work on translations and then to submit those results directly back to the source page (in the case of Wikipedia and Knol) and also to the Google translation service. Here’s a handy image made by Google to explain the process: 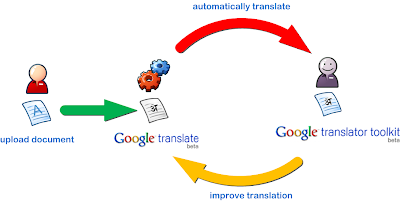 If I had any translation skills at all, I’d use this a lot and do my part to help the machine learn (SkyNet or not). More importantly, if I teach English 403 again at WSU (or something like it at another school), I will absolutely do a translation assignment that uses Google Translate Toolkit and Wikipedia.

In the translation project that my students did in Spring 2008, they translated recycling materials from the University for distribution among multilingual students and faculty. The “English” portion of the project was actually far more work than the translation itself—as it should be in an English class. Students had to produce a translation report that discussed the rhetorical changes they had to make, as well as mundane issues such as why the text block became longer (German!) or shorter than the original text (this is important for document layout). Here’s an example from one of the Indonesian students:

In translating the phrase “milk cartons & juice boxes,” I decided to further explain the classification of the milk. Since the word “cartons” means “boxes” in Indonesian, it will not make it specific if I only translated the “milk cartons” into “milk boxes” in Indonesian. Therefore, I decided to add the word “liquid” after the word “milk cartons” because “milk boxes” can be perceived by Indonesians as boxes for “liquid milk” or “powder milk,” of which the box for powder milk should be classified as an acceptable item. Other than that, the phrase “milk cartons & juice boxes” translates as what it is in Indonesian, except for the order of the translated words, being the words “cartons and boxes” put before the words “milk and juice” respectively: kotak susu cair dan kotak jus.

Students were a little shocked at how much work it took to write things up, once they got to that part, but were happy to hear just how much translators get paid if they are able to talk and write about their translations in such accurate, detailed, and clear ways.

I can envision doing the same sort of project using Google Translate Toolkit and Wikipedia, because students will be able to pick articles of interest to them—their hometown, their favorite sports team or entertainer, favorite food, the Maslow hierarchy of needs page, whatever. They can translate or fix a translation, talk about (in English) what they translated or fixed and why, they can upload the new translation to Wikipedia, and teach Google Translate a thing or two in the process. It’s a win-win for everyone, as far as I’m concerned.

2 Comments on “Google Translate, and Translation Projects in the Classroom”