Some of you may know (and even care!) that in the 7th edition of the MLA Handbook, URLs are no longer part of citations for digital resources. I will quote Mark Sample on this one: “How could one not see that these new guidelines were remarkably misguided?”

Personally, I’ve been ignoring the new rule. Ok, I suppose “ignoring” isn’t true. When my students this fall cited digital resources and dutifully included the URL, I let it go. It’s difficult enough to get students to cite at all, for whatever reason (poor training, I believe), so I certainly wasn’t going to go negative on them for using the 6th edition instead of the 7th edition of the handbook. In other words, I didn’t choose that particular hill to die on, such as it were.

In his blog post on the subject, “The Modern Language Association Wishes Away Digital Différance”, Sample clearly articulates the issues at stake (as usual):

In a strange move for a group of people who devote their lives to studying the unique properties of printed words and images, the Modern Language Association apparently believes that all texts are the same. That it doesn’t matter what digital archive or website a specific document came from. All that is necessary is to declare “Web” in the citation, and everyone will know exactly which version of which document you’re talking about, not to mention any relevant paratextual material surrounding the document, such as banner ads, comments, pingbacks, and so on.

The comments on his post are all good, including the MLA’s reasoning behind the change, offered by Rosemary Feal (executive director of the MLA). In short, it’s ok to add URLs if we want; the guidelines are meant to be flexible.

So that’s a little bit of context for the brief mention of Hari Kunzru‘s work in a panel at MLA ’09.

On a panel called “Locating the Literary in Digital Media,” Paul Benzon gave a talk (“Digital, Banal, Residual, Experimental”) that mentioned a Kunzru short story—”A Story Full of Fail”—that appeared online several years ago but then disappeared from the Internet. By “disappear” I mean no presence in the Wayback Machine, no presence in the Google Cache. If you search for it, you will not find it. But Benzon had a PDF (or a screenshot, I don’t recall) of some of this text. He could write about it, or talk about it, and that text would have to be cited. But how, if it does not materially exist anywhere that is accessible by, well, anyone (except Kunzru). Just because it was once a digital object accessible online does not mean printing “Web” in the citation will help matters, as it is not findable via any search engine. Printing the URL at which it once resided would be closer to a proper citation format because part of the citation is the access date—that access date would have been at the time at which the story existed at that URL and therefore contextually correct. But that doesn’t mean anyone else would be able to follow the citation to the text, as the text no longer exists.

I think you get the point—this is a conundrum.

As Benzon was talking, I tweeted about his example. Several people thought “a-ha! finally, a really good example to use when trying to explain this to students.”

As I tweeted about this relatively brief moment in a talk on a panel at 8:30 in the morning on the second day of MLA ’09, my tweet was indexed by Twitter. Within 8 hours, Kunzru’s Twitter followers (and anyone looking at the Twitter archive for #MLA09) saw this: 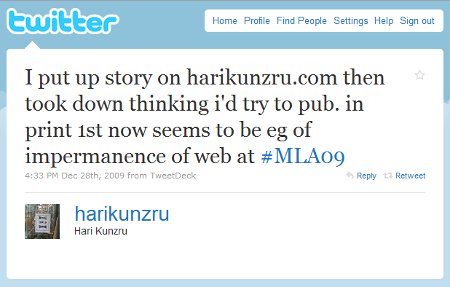 I got a retweet and an indication that he would like to know more. I mean, who wouldn’t? So I emailed him and filled him in on the context (all above), and we had a lovely email chat about these issues. With his permission, I’ve reproduced some of his comments below.

On the reason that “A Story Full of Fail” doesn’t exist online any longer:

I put it up, then took it down again, deciding that I’d rather give it a proper first publication, instead of just sticking it up online. So in terms of intention, I’m happy it’s no longer available for citation, but as an example of the problems with citation and URLs I agree it does seem to illustrate the terms of the debate perfectly. The ‘fluidity’ of the web and problems of archiving are issues for me, as well as everyone else.

On this citation issue just being the “tip of the iceberg”:

This is just the tip of the iceberg – I find that if I write something for a newspaper that’s then subbed (often in a way I dislike), I can then put my ‘own’ version up on my site – so some of the texts there I consider more authentic versions than those published in more ‘stable’ or ‘trustworthy’ venues. But in other cases, the version on my hard drive contains errors that were removed by subbing. Thus questions of intention are much more difficult to sort out than pre-internet. Not to mention what constitutes first publication.

Technically those two blockquoted entries above should be cited as follows:

But! They were two separate e-mails. You’d think some of this would go into the citation:

But I digress. Or do I? Either way, Benzon hit on a really good example, not only for classroom use but for continued discussion of issues of citation, archiving, rights of the author and so on. [Did someone say Twitter trivializes the very work done by language scholars? Hmm. Not so much, here.]

4 Comments on “MLA, citations, and a little Hari Kunzru”