jcmeloni Posted on December 10, 2010 Posted in Misc Life No Comments

The Prompt: “Wisdom. What was the wisest decision you made this year, and how did it play out?” (Author: Susannah Conway) 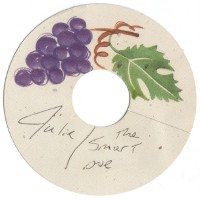 Don’t worry—I’m not so arrogant as to write “the smart one” on my own wine glass name tag. Someone did that a long time ago and I kept it because it made me laugh. A lot.

Ever since I was wee, I’ve been “the smart one.” I contend I’m not all that smart. Lucky, for being in the right places at the right time, sure. Also, lucky for having parents who taught me to read early on and let me do my thing with regards to learnin’ stuff…and bought me a TRS-80 and a Commodore64 and a subscription to Byte and…well, generally nurtured the nerd. Ok, it’s not like the label “smart” is untrue—and for sure at the party with the name tag shown above I was the smartest person in the room, Stanford degrees be damned (no offense, Stanford), but have you met some of my friends? Some pretty smart folks there. It is so wonderful to hang out with people these days and not be pointed out as the anomalous “smart one”; the…not-smart-one would be the anomaly.

Why am I talking about being smart (or not) in response to a prompt about wisdom? Because they’re not at all the same, for one thing, and for another thing no one has ever accused me of being wise…and I’d prefer to be called “the wise one” instead of “the smart one.” Smart people are alert and resourceful and generally bright/know stuff. But people who are good at memorization can pass for smart—or even be considered smart. But to be wise, that takes some serious work [not that being smart doesn’t, but work with me here]. To exercise good judgment, to have common sense, and to use those qualities consistently in the day-to-day matters that swirl in one’s life? That’s hard, and there’s not structured training for that. People joke about the “College of Hard Knocks,” but spending time at that particular institution is quite valuable. Everyone should.

I don’t struggle to be smart, but I do struggle to be wise. I’m made tons of smart decisions in 2010, but I’m trying to figure out a wise decision. You might think that “I decided to finish the PhD in 2010 instead of 2011” was a wise decision, because look at how the path unfolded, but that’s just lucky, and maybe a little smart. Common sense would not have said “sure! almost kill yourself to finish early!” You might also think that the decision to leave my current position in Victoria to take this other one in Virginia was a wise one—and that could very well be (though again, common sense would not have said “pick up six months after moving to Canada and move back to the States!”)…it’s definitely a smart decision.

But all in all, I think the wisest decision I made in 2010 was to trust someone. Not trust people in general, because that will never happen (no offense, good people), and not just any someone, but a specific someone. But almost a year ago now I pulled together all the snippets of good judgment and common sense that I’ve gathered over the years and decided yes. I am going to trust this person in matters of my career, my life, my overall wellness, and to some extent my everlasting soul. Ok, not that last part, at least not entirely.

So far, so good, because everything positive that’s happened to me since that moment can all be traced back to that single wise decision. If I am forever to be the smart one and not the wise one, but I get to do one wise thing each year, may it always turn out as well as this.

[This post is part of Reverb 10 “an annual event and online initiative to reflect on your year and manifest what’s next.” This is my post #10.]